As we continue the build up to the final world ranking event of the season, the 2015 World Masters sponsored by Henselite, we thought it was time for a little reminder of how the inaugural World Cup in August will work!

The top four ranked players for each country featured in the final 2014-15 Order of Merit listings after the conclusion of the World Masters, will be invited to take their place at the 2015 World Cup.  A Rest Of The World team can also qualify. This team will consist of the top four ranked players from the countries who do not have enough players included on the Order of Merit to field a team in their own right.

If a player who has qualified cannot take part in the event they will be replaced by the next highest qualifying player from that country on the Order of Merit list. The new player will take spot 4 in the team, with the remaining players moving up a spot in their respective team if a player above them has been replaced.

The event will start with Group Stages, through which nations will qualify for the Knock-out Stages.

The competing nations will be drawn into groups of 3, 4 or 5 (depending on the number of countries represented). This draw will be seeded, with the combined ranking points of each nation’s top four players used to determine the top 4 seeded nations. The top four nations, subject to results, will all be able qualify for the Semi Finals.

In the Group Stages of the tournament 6 points are on offer in each game. Each player will earn 1 point for their team by winning their own match, therefore a total of 4 points will be awarded for individual player wins. An additional 2 points will be awarded to the team with the best aggregate shot difference from all 4 players’ games. In the Knockout Stages, should a match finish in a 3-3 tie, then a tie break based on that used in SMPT ranking events will be used to decide the winner.

Full details on the World Cup including the teams, rules of play and much much more can be can be found on our new dedicated website: www.worldshortmatbowls.com which will be launched on 20th March 2015. 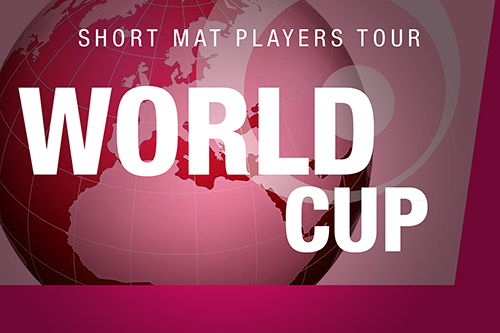