We are delighted to confirm the following fixtures to be played on our Show Mat at next Saturday’s opening day of the 2019 Irish Open. We’ve got a wealth of talent on show for you, with plenty of SMPT Champions as well as National, British & World title holders. Don’t forget, all matches will have end by end score updates live on our website live feed throughout the day and of course we’ll be bringing you live streaming of select matches as well.

Let’s take a look at the fixtures

A first meeting between the former European Open and World Cup champion and two times SMPT singles finalist. A tough match to call but a great way to kick off the action.

Our first live streamed match sees the defending Champion kicking off his campaign on the show mat with an intriguing match against 17 year old Hannah. These two met in the group stages last year at this event with Raymond edging it 12-10. Can Hannah get her revenge?

Two seasoned campaigners go head to head in our 4th match on the show mat. Both have a best finish of round of 16 in an SMPT singles event and they will both want to better that. Another tough match to call.

Former England international and World Masters Qtr finalist, Dan takes on British Open bronze medallist Tony in this all English battle. Both will be vying for a World Cup spot later in the year, so all points are vital!

A first meeting in singles between these regular SMPT pairs partners. Nathan has had great recent success including winning the recent World Cup with his Irish team mates. Can Terry get one over on his playing partner and good friend?

Another 17 year old makes an appearance on the show mat, this time Jamie must face one of the greats in Alan. Can Jamie make the impossible happen where we see Alan Paul actually lose a match!

Another great match as we see 3-time singles winner, Stephen, take on top Irish bowler William who will be buoyed with his Bronze medal gained back in April at the World Masters. Can he get the better of the SMPT’s Players Player of the Season?

World No6, Stephen is looking to make his first appearance in an SMPT final and faces the ever popular Noel Graham here. This will be the 4th time they’ve met with both sitting on one win a piece and one draw. Who will nudge in front in head to head meetings?

Our 3rd live stream of the day sees arguably the match of the day with current World No1 James taking on former No1 Mark in their 3rd meeting. Mark leads 2-0 and won the first event of the season in Chelmsford last month. Can James turn the tide?

This will be their 2nd meeting in singles play and the first for 5 years. Don got the better of Bronagh last time out but both are playing some great stuff at the moment. Another match that is too close to call!

We end the day with our final live streamed match between two great players. This will be the 3rd meeting between the two, with P.J having won both previous matches last season. Who will take the honours this time around? 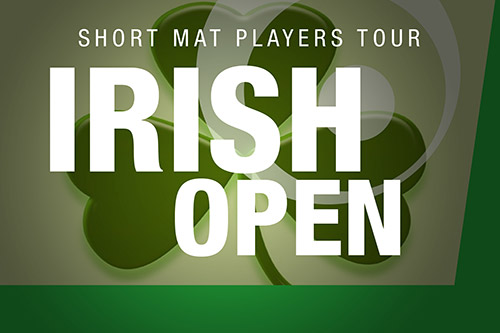